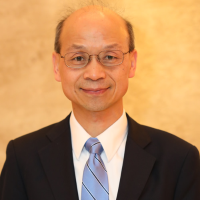 Dr. Qinghuang Lin is Director of Lam Research, USA. Before that, he was Director of Technology Development Center at ASML, a global leader in semiconductor lithography equipment, in San Jose, California, USA. Before joined ASML, Dr. Lin was a Research Staff Member, a Senior Manager and an IBM Master Inventor at the IBM Thomas J. Watson Research Center in Yorktown Heights, New York, USA. He has more than 15 years of experience in the semiconductor industry, all with IBM. He has held a variety of positions in semiconductor research, development, engineering, management and technology strategy for IBM's 0.25 um to 5 nm CMOS technologies, IBM's 512 Mbit & 1 GBit DRAM, novel memory technologies and other exploratory research. Dr. Lin has more than 90 issued US patents with more than 70 pending US patents. He is a recipient of 25 IBM Invention Plateau Achievement Awards. A frequent organizer and speaker of professional conferences, he is the editor or co-editor of 6 books and 9 conference proceedings volumes and author and co-author of more than 70 technical papers. Dr. Lin is an Associate Editor of Journal of Micro/Nanolithography, MEMS, and MOEMS and a Guest Editor of Journal of Materials Research focus issue on self-assembly and directed assembly of advanced materials. He has delivered more than 50 keynote or invited lectures worldwide. In 2002, Dr. Lin received an IBM Research Achievement Award for “invention, development and implementation of 248nm bilayer resist technology in manufacturing.” This IBM bilayer resist technology was also part of the 40 years of innovations in semiconductor technology that won IBM 2004 US National Medal of Technology -- the highest honor awarded by the President of the United States to America's leading innovators. In 2015, Dr. Lin, along with colleagues, received an IBM Research Division Outstanding Achievement Award for “Spin Torque Magnetic Random Access Memory (MRAM)” and an IBM Research Division Achievement Award for “193nm Negative-Tone Development Process for Advanced Memory and Logic Fabrication.” In 2016, Dr. Lin, along with colleagues, received an IBM Research Division Achievement Award for “Contributions to Fundamental Understanding of Line Edge Roughness in Semiconductor Technology.”

A member of AAAS, ACS, MRS, SPIE and New York Academy of Sciences, Dr. Lin currently serves as Chair of the American Chemical Society: Polymeric Materials Science and Engineering (PMSE) division and a member of the PMSE Executive Committee. He was Chairman of SPIE Advanced Etch Technology Conference in 2015 and 2016, a member of the Executive Committee of the SPIE Advanced Lithography Symposium and a past chairman of the SPIE Resist Conference. Dr. Lin also served on the Electorate Nominating Committee, Industrial Science and Technology Section of the American Association for the Advancement of Science (AAAS), the Materials Secretariat of American Chemical Society and Co-chair of PMSE Fellows Selection Committee. Dr. Lin has been active in serving the scientific communities, having served as conference chair, co-chair, vice chair, organizers and organizing committees of more than 60 international conferences. He is a member of two engineering honor societies: Tau Beta Pi and Alpha Sigma Mu.

Dr. Lin received his B.E. and M.S. degrees from Tsinghua University, Beijing, China and his Ph.D. degree from the University of Michigan, Ann Arbor, Michigan, USA. He was a post-doctoral fellow at the University of Texas at Austin prior to joining IBM. He also completed a MicroMBA Program taught by faculty members from the Stern School of Business at New York University and Columbia University Business School at IBM Watson Research Center.